We had the opportunity to interview Arizona poker player Kris Jonson about his recent tournament experience. Kris played at the recent World Series of Poker Big 50 event. The event featured $5,000,000 prize pool and a large 1 million dollar first place prize. Kris gave us some excellent insight to the true experience of playing poker at this renowned tournament. He also provided some great tips, for players interested in participating in tournaments. 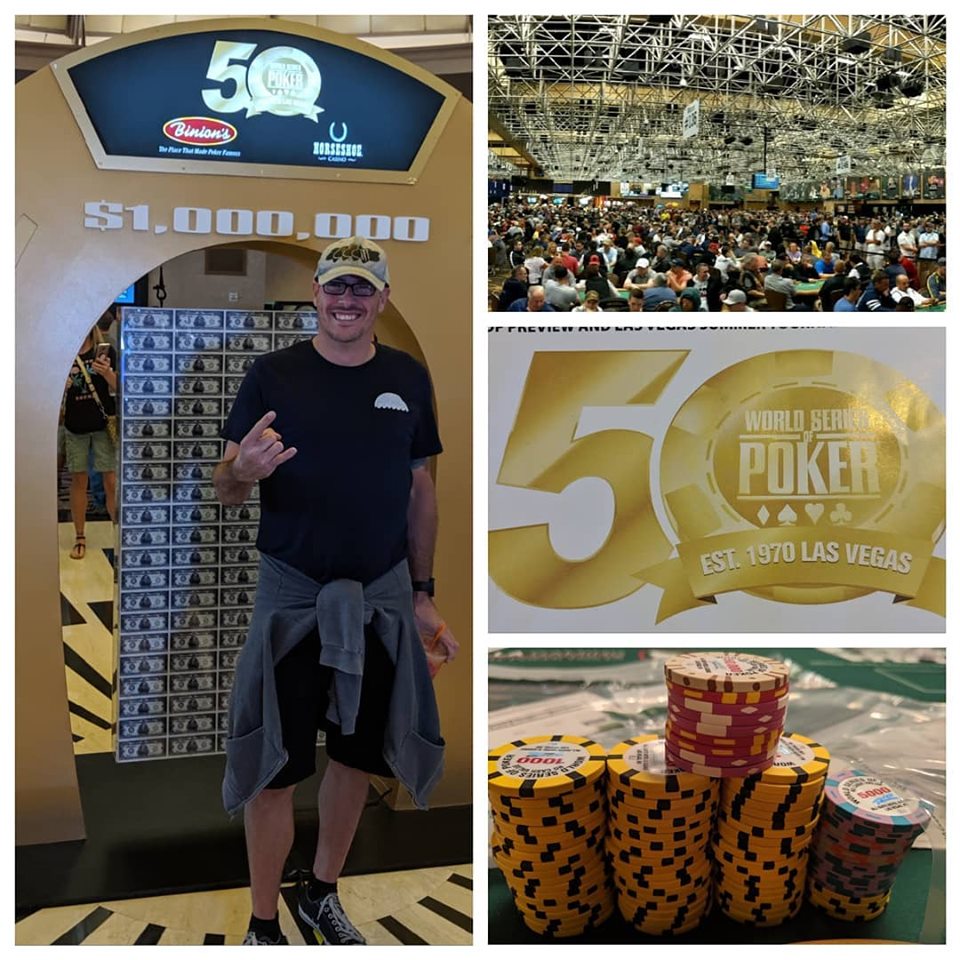 Can you tell us a bit about your start in poker?

I started playing poker when I was just a kid. I remember my family having large gatherings where bringing your spare change jar was encouraged, and the dealer called the game. I continued to play casually with friends throughout my teen and early twenties. By my mid-twenties, a friend of mine convinced me to come to the bar with him and play in a poker league. I had never played No-Limit poker up until that point, only draw games like 5 card and stud. I won the poker tournament that night beating out 50+ players and my wide-eyed friend.

I decided to start playing in more local poker leagues/bar games. At one point was playing 10-15 live tournaments a week back when poker was in it’s prime. One of those bar games landed me my first ever WSOP seat back in 2009. I played in a $1,500 event and got royally spanked. I would say my advice to new players is getting table time, as much time on the felt as you can (or even digital poker) as experience comes from live play. The more you see and experience specific scenarios, the better you will get at making the right decisions when they arise in the future.

What was your motivation for playing at the WSOP?

My motivation for playing this years 2019 WSOP Big 50 was the buy-in. $500 is one of the lowest buy-ins that the WSOP has ever offered. I had just come off of winning back-to-back tournaments at my casino here in Arizona, so my buy-in and hotel were covered for the event. For a four and a half hour drive, it made sense to try and run my recent winnings up even more.

Did your experience at the WSOP match your expectations?

The WSOP Big 50 definitely had its ups and downs from an experience standpoint. I absolutely loved that I got to play 3 solid days of poker (over 30 hours total) for a $500 buy-in. You don’t see that amount of play for that kind of value anywhere else in the world, which I guess is why it brought such a large audience this year. The WSOP is also amazing from the moment you walk into the main room and see over 400 poker tables spread out. It’s mesmerizing from a logistical standpoint on how they can even run these big events.

Meeting people from all over the world is one of the most fascinating things about the WSOP, that poker, as a game, is enjoyed and deeply rooted in many civilizations around the globe. I love that I can play a game with someone, and in the game play, we can have an entire conversation but outside of that, the person doesn’t know a lick of English. You get many experiences like that at the World Series of Poker. The cons, like any event of this size, is the lines. To get my alternate seat on Sunday, I waited in line for 4 hours. Then to cash out on day 3 of the event, I waited in line for 3 hours. So you have to have crazy patience for line waiting, as they are still extremely understaffed in that regard.

How did you prepare mentally for such a large tournament?

You can’t prepare for the WSOP honestly. I mean I guess if you had a huge bankroll you could do a marathon 12-13 hour cash session at your local casino, but I think that would be detrimental to your bankroll. Honestly, I think the best way to mentally prepare is to just focus on the objective, and that is to keep more chips than your opponent. That should always be your #1 strategy in poker tournament play. You play the marathon, not the sprint. I did find deep breathing techniques helped me at the table, and sometimes I would have to step away after a huge hand to compose myself and get back into the action.

Can you describe your style of play?

My style of play varies on the table. I would say during the WSOP it heavily leaned towards ultra conservative. If I was playing more than 3-5 hands an hour, I was more on the aggressive side which did happen a few times when I went on little mini-heaters and started catching sick hands. But for the most part, I was playing probably top 5-15% of pokers starting hands based on my position and read at the table.

Any advice for players crafting their own unique style?

I think the best advice anyone can get going into a large field like the Big 50 is to play conservative but don’t be afraid to play the table if it’s passive and weak. My starting table on Saturday was ultra-aggressive. Many times, I would 3 bet into a hand and get an over bet and a caller before the action came back to me and my measly Queen Jack offsuit which I would promptly fold because there is no way I’m ahead with a raiser and re-raise on my initial bet. Situations like that were common on Saturday. When I played as an alternate on Sunday, complete opposite. Soft table, lot’s of action when I had hands and lots of folding when I didn’t. The perfect recipe of a table for me with several good players but lots of inexperienced players with common tells.

What was your most exciting hand at the tournament?

Most exciting hands. Man, I had so many. They all kind of honestly blur together. I did have two good hands I played against poker pro, Kelly Minkin. We got into a heads-up match with me holding 1010. I made my standard 4 bet raise preflop, and she called me. The board came out all crooked junk, something like 27 9, she checked, I bet, and she folded. Pretty standard. We got into another hand shortly after that one. She led out with a 4 bet under the gun, something like a 20k raise into a 9k pot. The guy next to her shoved for 27k or so. I called in seat 7, and the small blind also called along with Kelly.

So we had a very nice sized pot. Board came out all funky again, and this time, I was holding JJ. Kelly bet something like 15k, and I raised her. The small blind folded and she took a moment but folded as well. The all-in turns over 1010 to which Kelly laughs, “That’s why I didn’t see any tens,” and she flips her mucked pocket tens over. No ten comes obviously, and I win the pot and knocked a guy out.

What was the most challenging part of the tournament?

The most challenging part for me is the last couple of hours at the end of the 13 hour days. I am beat mentally and physically from being so engaged in the game that I start making stupid mistakes. Making calls, I shouldn’t be making and just generally playing dumb poker. When I stumble away from these long all day sessions, I am a complete goobering mess. I mean I couldn’t even tell you my name and birthdate it’s that bad. So poker definitely takes its toll mentally, and you need some time to recover with that.

Do you have any tips for those who are interested in playing at WSOP?

My top tip is to play tight. Also recognize when your table is taking advantage of you or if you see weakness in your opponents and make shifts in your play to accommodate that. Also, try and study as much as you can. Have close friends who are also into poker look for apparent tells and gaps in your play. I saw many  beginner tells it was frightening. Even in day two, you still have people looking at their hole cards out of position, giving me the ability to get a read on them before it’s my turn to act. Seeing them reach for their chip stack before I have even looked at my cards tells me I have at least one player whos coming along. Stuff like that is basic, but you see it deep into the levels. Its still very surprising to me to see those amateur tells.

Do you play online? What are your favorite places to play?

I used to play online before Black Friday hit. I was big on Pokerstars and FullTilt. Nowadays if I do play anywhere online, it’s at Ignition Casino. I like their format because everything and everyone is randomized. So, you don’t get these basement bums running HUDs and having massive databases on everyone’s play. But honestly, I still enjoy and prefer live play over digital, nothing beats the experience as a whole.

What does the future hold for you?

I have been serious with poker on and off over the past fifteen years, and I continue to see it that way. I do like that I cashed at the Big 50 as that was my third tournament in a row for me. So now that I have a decent bankroll, I plan on playing a lot more tournaments in my state, especially the state championship at Talking Stick. I will definitely be back for more WSOP events in the future.

Thanks, Kris for spending a few moments with us and sharing you experience and tips. We wish him all the best in his upcoming matches! You can check out Kris’s official Word Series of Poker profile, here. Thanks so much for reading!