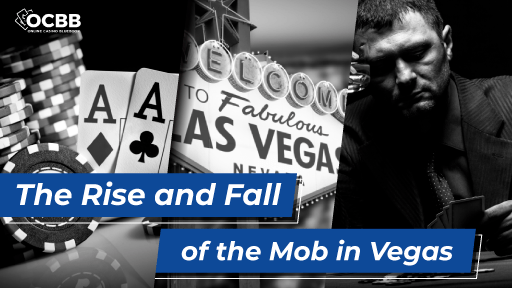 According to former state archivist Guy Rocha – “The general perception on the part of the public is that Las Vegas and the mob have been inextricably linked, and I don’t think it will ever be extricated.” “We owe a debt of gratitude to the Mafia for developing Las Vegas, and there’s nothing to be ashamed of.” “It was the mob that moved Las Vegas forward, with the good, the bad, and the ugly.”

In 1910 Nevada outlawed gambling, but this paved the way for illicit casinos and what they called speakeasies. By 1931, when it was legalized again, organized crime was rife and had already rooted itself in the city. 10 years later, the first Vegas resort was opened. Before long, others followed suit to form what we call “The Strip” today.

In 1946, with the financial aid of mob member Meyer Lansky, the infamous Bugsy Siegel opened the Flamingo, a swanky resort that booked top-drawer talent for its lounges and shows. Anyone who was “anyone” attended these soirees. Despite this, Siegel, with no business experience, struggled in making the resort profitable, costs soared, and Mob bosses were on the losing end.

Siegel was murdered a year later, but his vision for the Flamingo and Las Vegas has continued. The new, mob-connected managers took over the Flamingo. This group combined physical and business toughness. Longtime Phoenix bookmaker and veteran casino operator Gus Greenbaum, Sedway, Minneapolis gambling veteran Davie Berman, and Ben Goffstein, who was involved in often violent newspaper circulation wars. Some had a history of violence, but all were experienced businessmen who made the Flamingo very profitable.

​​Over the next two decades of legalized gaming in Nevada, almost every casino and hotel in LV had some connection to Lansky and organized crime. The casinos, the city, even Nevada itself were made for the very things the Mob stood for. That being said, contrary to the belief that their illegality extended throughout the operation. Almost all of them ran honest games: They appreciated the opportunity to operate legally and wanted to avoid screwing that up, and the odds were so strongly in favor of the house that they did not need to cheat.

Due to the rising increase of these Mob activities, a so-called “Black Book” of Mafia member names were listed. The state gaming regulators ensured these members were banned from casinos. While federal officials were on the lookout for these gangsters. Once billionaire Howard Hughes started buying up these hotels on the Strip, mob activities slowed down. Still, the skimming operations remained due to the same employees working the tables and counting rooms.

In 1969, not even the Corporate Gaming Act, which afforded the licensing of key investors and executives to own casinos rather than individual stockholders, stopped the Mob from finding loopholes.
In 1971, Anthony Spilotro, better known as Tony the Ant, arrived in Vegas to take over loansharking and skimming. Spilotro, born and raised in Chicago, an enforcer and hitman for the Chicago mob, ran his operations at the gift shop of Circus Circus. Later, he was found dead and buried in a cornfield, as rumor has it, due to his greed. Federal authorities had closed in on many other mob members. Which all added to the Mafia losing their grip on the Strip.

Over the years that passed, the Strip transformed to become the world’s entertainment mecca. It is ranked high among so many other world-class destinations. More importantly, the hotel and casino industry has been a consistent major employer and source of capital for the city.