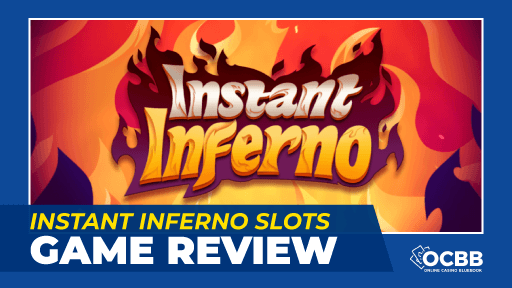 Instant inferno is the hottest new slot game brought to you by none other than the Bovada group. It was released in 2021, and it is a 5 reel 30 payline fruit slot game with multiple scatters and a free game feature. Instant Inferno is also on the HOT list right now as it boasts a 5000x multiplier. At $1 a spin, we have to concur that that’s pretty incredible.

The concept centers around the underworld. It has a fun flaming reel theme and solid graphics too. Let’s get into the details of it below.

Firstly, it has to be mentioned that the mobile gameplay for this particular slot game is outstanding. It optimizes nicely. The lowest paying symbols vs. higher-paying are highlighted below :

Of course, the wild symbols also equate to bigger wins and without a doubt can substitute for certain symbols. Winnings are awarded left to right on any valid pay line. Like virtually any other slot around, only the highest paying combination will be paid out on a win.

In terms of scatters, there are two different types listed below :

Premium Inferno and Instant inferno – the details of which will be reviewed in-depth later. 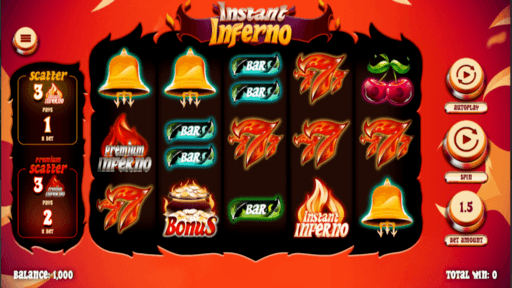 Furthermore, there is also a bonus called the “Pick Me” mini-game. Presently, players lucky enough to get this bonus will be presented with 20 tiles to choose from. When 3 tiles are uncovered with the same prize, the player is awarded some free spins and a multiplier.

Instant Inferno slots reminds us of the first slot machines, and we think whether or not you would appreciate it would entirely come down to each player’s preference. This isn’t like the newer story-themed type slot. Instead, it’s more of a ‘simpler’ (for lack of a better) word vintage slot game with upgraded graphics and audio. The preset bet amounts are between 0.30c and $150.

In regards to symbols – as mentioned before, just like the older fruit slots games – you are going to need three or more of each on the payline to get a winning combination. Therefore, the wild symbol substitutes for most symbols except scatters and bonus symbols.

The premium scatter known as Premium Inferno can appear anywhere on the reels and allows for its very own payouts. The second scatter, known as Instant Inferno, is the same with a lesser payout than those mentioned above.

If the bonus symbol appears anywhere on reels 2, 3, and 4, the Pick Me game is triggered, rewarding the player with Free Spins.

As explained earlier, once you get the bonus, represented by the Pot of Gold on reels 2, 3, and 4, this mini-game instantly appears where you get to pick from 20 tiles. Once you collect three of the same symbols on the tiles – you get awarded free games and a multiplier. So, the number of free spins and the amount of the multiplier will vary with each tile uncovered. It is possible to re-trigger spins including the same multiplier as previously awarded until the total number of 50 is reached. So, that is the maximum number of spins that can be given.

In addition: Please also note that the wild will substitute for the total and adds 5 additional free spins to whatever prize you win. 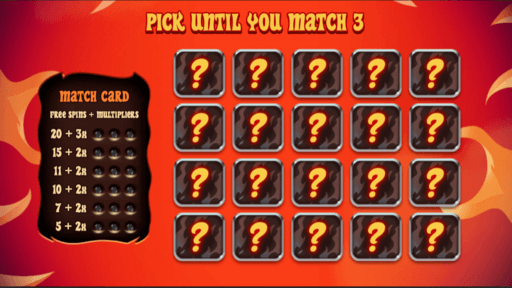 The review team personally tested this game on one of our favorite sites, namely Slots.LV and we recommend you start your fiery journey on Instant inferno there too. Enjoy the Flaming Good Fun!