To become a master chess player (think Garry Kasparov or Bobby Fischer) you must have a certain set of skills that includes cautious recklessness, the ability to react in the face of adversity and strategic thinking and planning. Sure, there are some skills chess players possess that can be applied to poker strategies, but the two games are quite different in that chess is defined by skill while poker is just as much chance as it is skill (that’s what makes it exciting, after all). Chess involves playing on what you can see and poker is mostly about what you can’t see. However, there are some similarities between the two crafts and also a few lessons poker players can learn from chess masters. 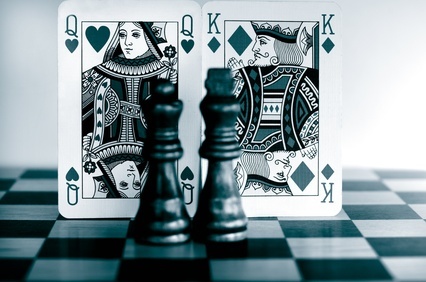 Reading Other Players is Essential

Both chess and poker require players to read their opponents; however, there is one fundamental difference: in chess, you have to read your opponent in relation to actions that directly influence the development of the game that is taking place at that precise moment. In poker, you have to read the body language, expressions and development of play over time and sometimes it takes a few hands to learn your opponent(s) mannerisms and what they mean. Master chess players know how to identify opponent weaknesses and use them to play particularly aggressively when the opponent is showing a lack of confidence.

Chess is an Even Field, Poker is Not: Deception is Your Best Friend

In a game of chess, the two players start on even terms. They both have the same pieces and shifts in the balance of the match are directly related to players’ decisions. This is one of the primordial differences between the two games. However, there is a lesson here if you are the glass-half-full kind: poker is a game of concealment, while chess is a game of showmanship.

Example: If you are playing poorly in chess, your opponent knows it, but, in poker, you might have a poor hand and still act like you own the game (we all love bluffing, right?). You can use deception in your favor.

Aggressive Play Can Pay Off

In both chess and poker, being aggressive from the start may be part of your strategy. Now, playing aggressively doesn’t mean that you have go all-in right away in a game of poker, or that you start moving your bishops all over the place in a game of chess. In both games, taking your time builds anticipation and could make your opponent nervous. Some chess masters confess that they know their next move right away, but choose to make their opponent wait as part of the ultimate strategy. It might not be the best poker etiquette, but if you’ve got the time, why not make ’em sweat a little?

Planning Gets You Places

When you start either a chess or a poker game you have a limited set of resources that must be played wisely. The best chess players have perfected this: they know that sometimes sacrificing one or two pawns to protect the king or advance a more powerful piece is necessary. The same can logic can be applied to poker: see your chips as resources that you have to put to the best use. This will stop you from being impulsive.